Remembering One of Our Own

May 30, 2022
Memorial Day is such a solemn holiday, a day specifically set aside for us to remember and think on the sacrifices of those brave men and women who gave the last full measure of devotion to a grateful nation.
Today, thinking about up and coming projects at the Greene County Historical Society and work that will be commencing at the old County Cemetery on the Hill above the County Jail, I am reminded of Henry Younken.   Henry, is one of the hundreds of individuals buried in the County Home Cemetery and was once a resident of the building that the Greene County Historical Society Museum now calls home.  Though most of the graves in the cemetery are unmarked, Henry is one of two people who have actual stone markers at their graves. 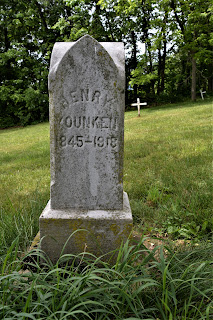 Henry was a veteran of the Civil War, and though he did not die in battle, on a day such as memorial day, he is a person definitely worth remembering and memorializing.
Henry was born in 1845 to Charles and Nancy (Henry) Younken in Upper Turkeyfoot Township, Somerset County Pa, and by age 14, Henry's family had settled not too far from Ryerson Station in Richhill Township, Greene County Pa on a large working farm.  Henry never went to school.
On August 2nd, 1864, Henry enlisted in 14th Pennsylvania Cavalry, and unit in which several of his cousins and distant family members had also enlisted, he rose to the Rank of Corporal.
Shortly after the war had ended, Henry became deathly ill with Malaria, and his sergeant recalled that he had found him "...in a tent very sick. Had him carried from there to the Field Hospital and did not think he could live any length of time. Had no way of knowing what his disease was. One of the boys who were carrying him, made the remark that we might as well bury him here, and save the trouble of carrying him so far to the Hospital, for he would be dead in a day or two anyway."  Henry beat the odds though, and eventually recovered receiving an Honorable Discharge at Alexandria Virginia on May 30th 1865.
In 1866, Henry would marry Elizabeth Piatt, widow of Civil War soldier Robert Piatt, and the couple would rear a family of 5 children.
Henry, Elizabeth and their children would move around frequently, living between places in Greene County, Wheeling WV, and locations around western Fayette County PA.    In his later years Henry would suffer health problems, including congestion of the heart.
By 1the time he was in his 70's, Henry would be alone, living at the Greene County Home where he died of Kidney Problems on December 29th 1918.
For many of the folks who lived and died at the County Home, the only record of them we can find are a few brief words entered into the County Home Ledger, Henry, however we are able to learn a little bit more about.
Today, when you celebrate the holiday, be sure to remember all of those who DID give the last full measure of Devotion, and remember men like Henry, who served his country and came very close to being forgotten in a lonely cemetery on a hill.

Popular posts from this blog 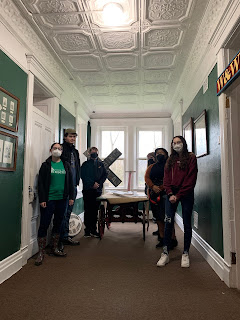 We are always trying to be innovative and up to date here at the Greene County Historical Society, and as we prepare for our opening day this Saturday, April 30th 2022 from 10AM to 3PM we are excited to announce the next step in our Museum Interpretation.   Thanks to the Generosity of Mr. Glenn Toothman, CEO of Memory Medallion and the hard work and dedication of Dr. Kathleen Thompson's History Class at Waynesburg University, the first floor rooms of our West Wing now feature completed Memory Medallions. Memory Medallions are small metal discs with a QR code, that when scanned by a Cell Phone or Tablet provide the user with detailed information and photos about the displays and items in our rooms. Each Student completed two medallions to bring to life the various exhibits in that portion of the Building.   As you tour our museum, be sure to look out for the Medallions, and utilize them to take your next step into a journey through Greene County History. The Photo to the Left is Dr.
Read more
April 07, 2021 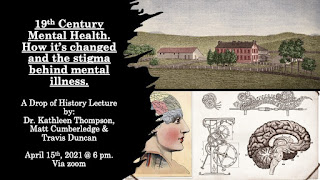 What's Coming up at the Greene County Historical Society! As we prepare to open for the season, we have SEVERAL Exciting Events to look forward to! On April 15th, at 7PM on Zoom, Join us for the Next Installment of our Drop of History Lecture Series.  Matt Cumberledge from the Greene County Historical Society, Kathleen Thompson from Waynesburg University and Travis Duncan from GreeneArc will be discussing Mental Health in the 19th Century and the role treatment and care for the mentally ill played at the Greene County Almshouse.  This should be a very informative presentation that will deliver a lot of new material related to the Almshouse, or County Home as it was later known, in Greene County. Follow the links below for more information and to register: Event Registration On April 24th, 2021, join us for our Virtual Opening Day and 5K.   We will be releasing fun and interesting videos throughout the day on Facebook, and the museum will be open for tours.   Also don't forget
Read more